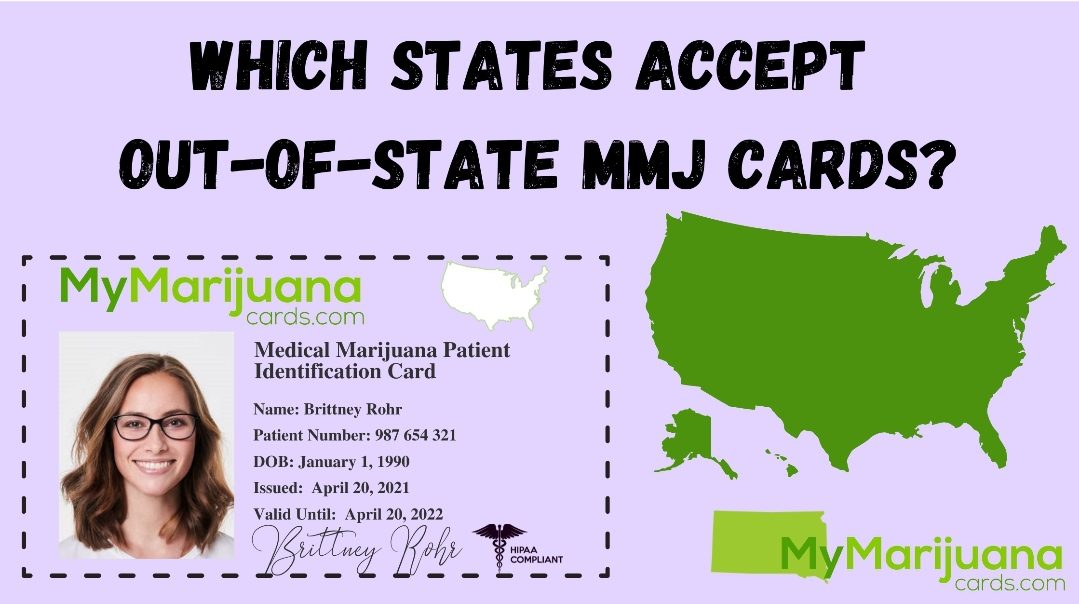 These are the states that presently accept out-of-state MMJ cards:

Just because you have a medical marijuana card doesn’t imply you can buy it at a dispensary in a legal state. You may buy medicinal marijuana in the following states with an out-of-state card.

Arizona allows limited reciprocity for “visiting qualified patients.” An out-of-state medical cannabis card is required, as is residency in Arizona for less than 30 days. Individuals must also be licensed in their home state to qualify for an Arizona medical card. Those are:

With a valid Arizona medical marijuana card, you may buy up to 2.5 ounces of cannabis from a dispensary or a certified caregiver every two weeks. Recreational cannabis is legal to purchase in Arizona as of 2021, with a possession limit of up to 2.5 ounces.

Washington, D.C. only accepts reciprocity from states that have a similar scheme. Among them:

D.C. currently has no retail marijuana legislation. However, since it is decriminalized, only approved MMJ patients may obtain cannabis from dispensaries. If your state isn’t listed, you may still carry your medication as long as you keep it minimal. Concentrates and hashish are still prohibited, but you may own up to 2 ounces of cannabis flower. If you visit Washington, D.C., avoid smoking cannabis on government grounds and only consume it on private property.

Adults over the age of 21 may possess and consume marijuana in Maine. The deadline for public access to retail premises was originally set for 2018. Adults may still own up to 2.5 oz of cannabis flower and 5 g of hashish or concentrates, though. Patients from specific states may utilize their patient status to acquire marijuana at any of Maine’s medicinal dispensaries. Maine now accepts qualifying patients from these states:

In 2018, Michigan legalized recreational cannabis. Adults over the age of 21 may possess up to 2.5 ounces of cannabis flower or 15 grams of concentrates. There are medicinal marijuana dispensaries all around the state. Medical marijuana cards from other states may be accepted by Michigan shops.

Montana has reciprocity with other states, enabling medical marijuana cardholders to possess and use marijuana when visiting. Meanwhile, no Montana border state has authorized medicinal marijuana, making it unlawful to carry it into the state. Since South Dakota has legalized cannabis, this may change. Montana has legalized recreational marijuana since January 2021. Ages 21 and above may possess, consume, and cultivate up to one ounce of marijuana on sale in 2022.

Out-of-state medical marijuana users may possess up to 2 ounces of useable cannabis in New Hampshire but may not buy from local shops. The patient must also meet the criteria for New Hampshire’s medicinal marijuana program.

Visiting patients may enter dispensaries in Rhode Island if they carry their actual medical marijuana card and a state-issued I.D. Patients from other states may also possess the same quantity of Rhode Island, medicinal marijuana residents. 2.5 ounces of useable cannabis is the limit.

Like the other states on this list, Utah requires patients to fulfill one of its own qualifying conditions. Among the requirements are: