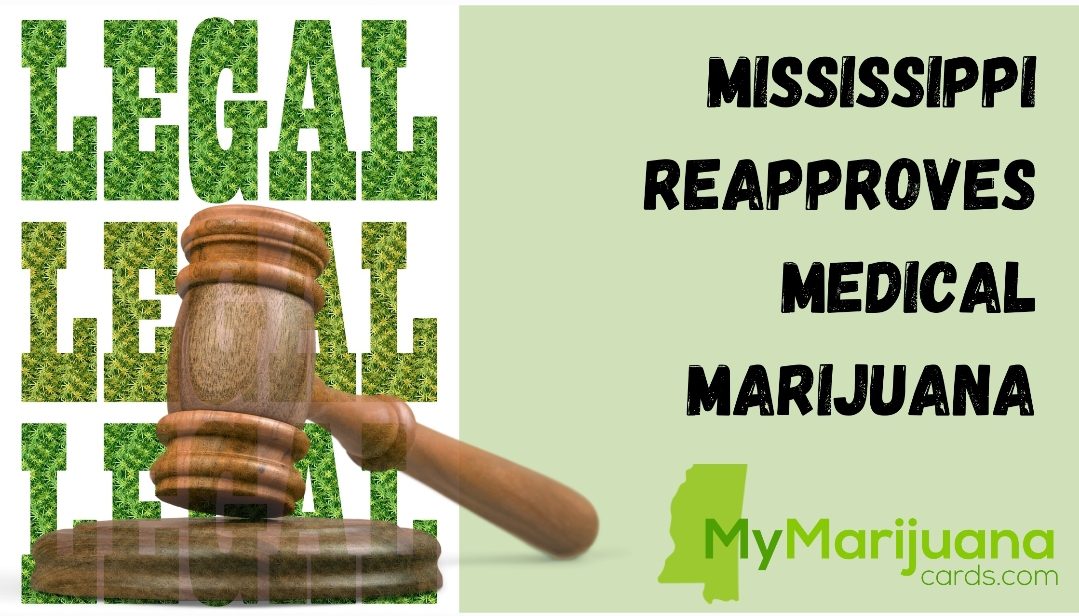 My Marijuana Card has been keeping an eye on things happening in Mississippi in regards to the pending Medical Marijuana Program that was stalled. So we’re happy to share with the community   that on Wednesday, February 2, 2022, Mississippi Governor Tate Reeves signed into law the Mississippi Medical Cannabis Act (SB 2095) permitting medical marijuana for certain patients, which was introduced by the state legislature. Per the National Conference of State Legislatures, Mississippi is now the 37th state to enact legislation permitting the use of marijuana for medicinal purposes in the United States. We can further help our patients in Mississippi achieve receiving their medical marijuaan cards.

“There is no doubt that there are individuals in our state who might do much better if they had access to cannabis in medically advised amounts,” says the governor.

According to Mississippi Medical Cannabis Act (SB 2095), those suffering from “debilitating medical diseases” are permitted to use medicinal cannabis inside the state and get the registration identification cards necessary to purchase the medication. Caregivers who have been authorized by the government will also be allowed to acquire cards.

In a social media post, Reeves said, “I commend all of the legislators for their devotion and hard work on these amendments.” “I am really grateful to each and every one of you: Mississippians who spoke up.” And My Marijuana Cards is grateful too. We know how many of you have been anxious to hear of some good news, so we’re proud to be able to give it to you.

The signing comes just a week after the State House and Senate get the final version together. Reeves claimed that the bill’s final version included significant improvements over earlier versions, such as allowing medical professionals to prescribe the drug only for purposes that fall within the scope of their practice and prohibiting marijuana dispensaries from being located near churches and schools, among other provisions.

In addition, Reeves said firmly that the legislation now on his desk “is not one that I would have drafted myself.” The legislators who drafted the bill’s final version (the 45th or 46th draft) did make significant changes that brought us closer to our ultimate goal, as stated in the statement.

As reported by the Associated Press, most Mississippi voters expressed support for a medical marijuana initiative in November 2020, which would enable patients to get up to 5 ounces of marijuana each month. In a later ruling, according to the Associated Press, Mississippi’s Supreme Court declared the vote invalid, claiming that the state’s initiative method was outdated and that the proposition had not been properly put on the state ballot.

According to the National Center for Complementary and Integrative Health, drugs containing cannabinoids may be effective in treating illnesses such as epilepsy, cancer-related nausea, and HIV/AIDS-related lack of appetite and weight loss, among others.

We are keeping our patients in the know about the bill and what’s next, so here’s what we know thus far about the new legislation, plus more to come:

How much marijuana can a Mississippi medical marijuana patient  purchase in a month?

What conditions qualify for medical marijuana in Mississippi?

It also allows for those with chronic, terminal or debilitating disease or medical conditions that produces one or more of the following:

The act also allows for “any other serious medical condition or its treatment added by the Mississippi Department of Health.”

When does the Mississippi Marijuana program begin?

The program will kick up in 120 days, Thursday, June 2, 2022, with the issuance of licenses and registrations to the state’s first cannabis growing, manufacturing, and packaging enterprises. The Mississippi State Department of Health will be in charge of overseeing the effort.

How to Obtain a Medical Marijuana Card in Mississippi?

A Doctor of Medicine (MD) or a Doctor of Osteopathy (DO) are the only medical professionals who are permitted to prescribe medicinal marijuana to people between the ages of 18 and 25 and to minors under the age of 18 (with the agreement of a parent or legal guardian). A medical practitioner may only recommend medicinal marijuana if they are within the scope of their professional competency. This implies the need for an in-person meeting.

When will medical marijuana dispensaries open in Mississippi?

What is the difference between this measure and the ballot proposal adopted by voters in November 2020?

The final bill varies significantly from the initiative approved by voters during the November 2020 general election. The proposition and the state’s ballot referendum system were both invalidated by the Mississippi Supreme Court in May 2021.

Join our waitlist and let us help move you forward in this process, click here. By joining our waitlist you’ll be informed of any and all developments in the state’s medical cannabis program. There will be continuous updates on when the program will be fully up and moving along. Mississippians can soon get access to medical marijuana! The journey has been a long one, but we are finally here.