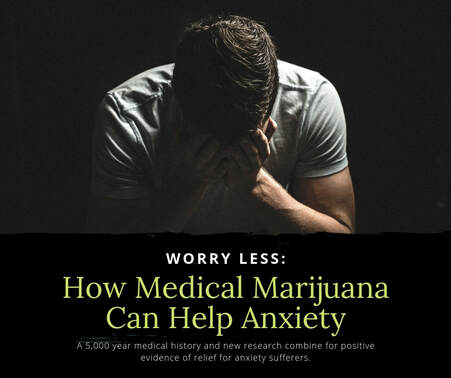 Cannabis has been used medicinally for over 5000 years, its most notable effects being general states of relaxation and euphoria — the opposite of what we know today as a state of anxiety. Medical marijuana looks like a potential win-win for tentative anxiety sufferers seeking alternative treatments. ​

The Ohio Medical board is considering adding 5 new conditions to those that qualify for treatment with medical marijuana in Ohio, including Insomnia, Depression, Anxiety, Autism, and Opioid Use Disorder. We’re delving more deeply into each one to keep Ohio Medical Marijuana Card holders and potential patients informed on access, conditions and treatment options for health, relief and empowerment.

(Edit 6/14/19: Ohio’s 12-member medical board was set to make a final vote June 12, however the voting has been postponed as the board’s two new members haven’t had time to read up on the issues. The president of the board said there is “no rush” on approving new conditions and no official date has been set.)
​Anxiety

Cannabis has been used medicinally for over 5000 years, its most notable effects being general states of relaxation and euphoria — the opposite of what we know today as a state of anxiety.

Interestingly enough the word euphoria, derived from the Greek : “euphoros,” doesn’t mean high, but rather, healthy.

This excerpt from Merriam Webster explains:

“Nowadays “euphoria” generally refers to happiness, but derives from “euphoric,” a Greek word that means “healthy.” Given that root, it’s not surprising that in its original uses, it was a medical term. A 1706 quotation shows how doctors used it then: “‘Euphoria,’ the well bearing of the Operation of a Medicine, i.e. when the Patient finds himself eased or relieved by it.”

Cannabis curbs the effects of anxiety through interaction with the body’s endocannabinoid system. Cannabinoids, an extraordinary class of lipid-based chemical compounds, bind to receptors in body cells, altering the release of neurotransmitters.  A network of sorts promotes homeostasis throughout the body.  Using endocannabinoids as a medium balances basic body functions across biological systems.

A NORML article calls the system “perhaps the most important physiologic system involved in establishing and maintaining human health.”

“The endogenous cannabinoid system, named after the plant that led to its discovery, is perhaps the most important physiologic system involved in establishing and maintaining human health. Endocannabinoids and their receptors are found throughout the body: in the brain, organs, connective tissues, glands, and immune cells. In each tissue, the cannabinoid system performs different tasks, but the goal is always the same: homeostasis, the maintenance of a stable internal environment despite fluctuations in the external environment.

Cannabinoids promote homeostasis at every level of biological life, from the sub-cellular to the organism, and perhaps to the community and beyond. Here’s one example: autophagy, a process in which a cell sequesters part of its contents to be self-digested and recycled, is mediated by the cannabinoid system. While this process keeps normal cells alive, allowing them to maintain a balance between the synthesis, degradation, and subsequent recycling of cellular products, it has a deadly effect on malignant tumor cells, causing them to consume themselves in a programmed cellular suicide. The death of cancer cells, of course, promotes homeostasis and survival at the level of the entire organism.

Endocannabinoids and cannabinoids are also found at the intersection of the body’s various systems, allowing communication and coordination between different cell types. At the site of an injury, for example, cannabinoids can be found decreasing the release of activators and sensitizers from the injured tissue, stabilizing the nerve cell to prevent excessive firing, and calming nearby immune cells to prevent release of pro-inflammatory substances. Three different mechanisms of action on three different cell types for a single purpose: minimize the pain and damage caused by the injury.

The endocannabinoid system, with its complex actions in our immune system, nervous system, and all of the body’s organs, is literally a bridge between body and mind. By understanding this system we begin to see a mechanism that explains how states of consciousness can promote health or disease.

In addition to regulating our internal and cellular homeostasis, cannabinoids influence a person’s relationship with the external environment. Socially, the administration of cannabinoids clearly alters human behavior, often promoting sharing, humor, and creativity. By mediating neurogenesis, neuronal plasticity, and learning, cannabinoids may directly influence a person’s open-mindedness and ability to move beyond limiting patterns of thought and behavior from past situations. Reformatting these old patterns is an essential part of health in our quickly changing environment.”

​This video from Weed Easy illustrates the process brilliantly:

A number of factors, including marijuana prohibition, have limited the depth of research available on the interworkings of this extraordinary body system. Despite this, evidence that cannabis is effective against anxiety is sound.

“The results from this survey indicate that many patients find relief from the symptoms of anxiety by using medical cannabis. This study also demonstrates that effective medicines can be produced organically, locally and sustainably and still comply with strict quality specifications. Patients have a specific preference for certain strains of cannabis for treating anxiety, and strains which they find most effective have distinctly different chemotypes than those they find least effective. In contrast, some other patients experience anxiety as a side effect of using cannabis. Cannabis can be used as an effective anxiolytic agent, but further investigations are required to find which chemotypes or doses are anxiolytic, and which are anxiogenic. From a broader perspective, cannabis can be produced sustainably, and its many uses could help us to preserve the biosphere we all need to survive, relieving anxiety worldwide.”

One study looked at effects in the systems of rats in the presence of snakes:

All in all, proof of its positives stretch back to ancient times, and paints a much more positive picture of treatment than what prohibitionist models suggest. There’s exceptionally strong evidence that cannabis is effective against anxiety and promotes health and homeostasis throughout multiple body systems.

Despite all this, anxiety still doesn’t qualify for cannabis medical treatment in Ohio, though Ohio’s 12-member medical board is set to make a final vote June 12th. Check back here, with us  between now and then for updates on, news, science, and treatment, as we support you on your healthcare journey.

If you are an Ohioan suffering from one of these 21 medical conditions you may be eligible to obtain your own Ohio Medical Marijuana Card to treat your ailment with medical marijuana, which includes both THC and CBD products. Any of the products listed above can be found at your nearest Ohio Dispensary.

​Click here to learn more about what My Marijuana Card’s state-certified Ohio marijuana doctors can do for you, or give us a call at (419-237-7119) and our friendly patient coordinators will set an appointment and walk you through the process of receiving your own Ohio Medical Marijuana card.