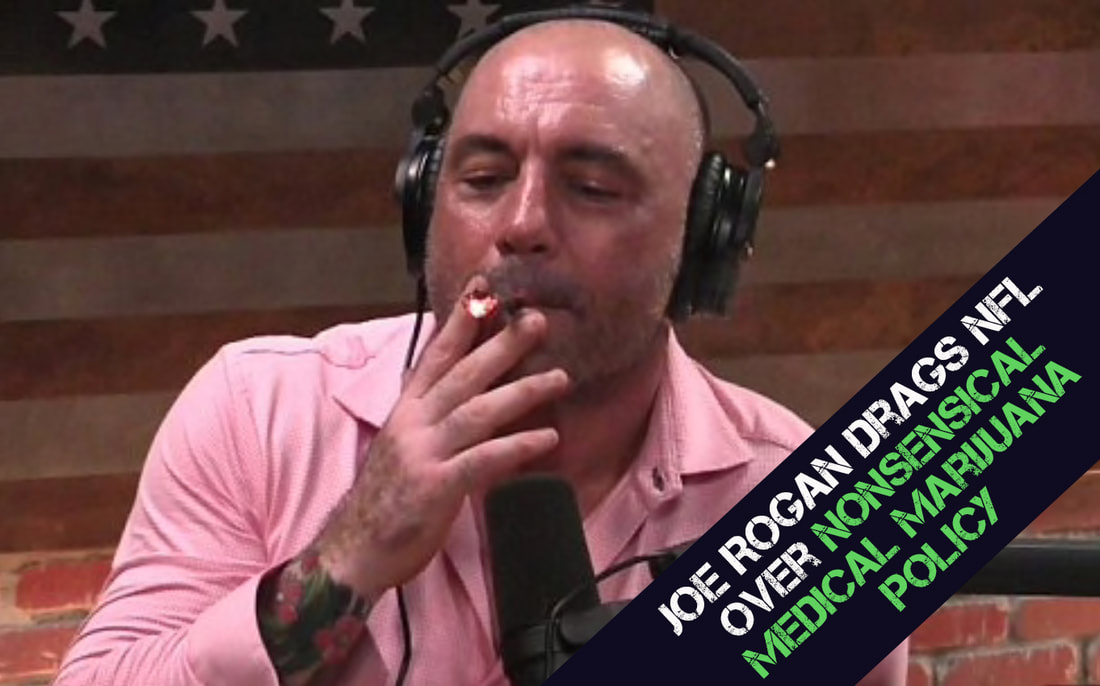 “It just doesn’t make any sense,” Rogan, an outspoken medical marijuana advocate said on a recent podcast episode. “Some of those guys are so severely injured. I mean, it is one of the most brutal sports, if not the most brutal sport in the world. And the fact that these guys can’t seek marijuana for relief when they allow them to take opioids is bananas.”

Joe Rogan dragged the NFL for their medical marijuana policy in episode 1543 of his popular podcast The Joe Rogan Experience.
“Some of those guys are so severely injured. I mean, it is one of the most brutal sports, if not the most brutal sport in the world. And the fact that these guys can’t seek marijuana for relief when they allow them to take opioids is bananas. It just doesn’t make any sense.”

“We live in an insane society,” author and JRP guest Graham Hancock followed. “…Which has got all its priorities upside down, and is completely screwing up this beautiful world that human beings have been gifted by the universe. And I think it’s a relatively few people… It’s a messed up world and a kind of litmus test for how messed up that world is.”

They were speaking in reference to a situation surrounding Mike James, who made history as the first NFL player to file a therapeutic use exemption sepcifically for medical cannabis, so that he could treat his ankle injury with without the opioids he was originally prescribed.

He didn’t shuck or jive. He was upfront about the issue and went through the proper channels necessary to play, and comply while protecting his standards and his health.

“My career is at great risk,” James told CNN. James is now a free agent after being released by the Detroit Lions.

“This is the first active player who’s been willing to put their professional career on the line, to openly admit that they not only have been using this cannabis but need it to function at the highest level,” said Dr. Sue Sisley in the same report. Sisley is an Arizona-based physician who is a board member of the nonprofit Doctors for Cannabis Regulation and has been helping James with his exemption application.

Ultimately, James is no longer in the NFL. James told CNN that he “never would have guessed that he would make history due to a therapeutic use exemption, but if, 30 years from now, his biography states “medicinal marijuana advocate,” he would be fine with that.

​”I’m not ashamed of it,” James said. “I’m not embarrassed about it. It is something that I will continue to use, because I have a life to live.”

​And don’t you have a life to live too? Of course you do. And here at MyMarijuanaCard, we advocate for your freedom to live that life free from constraints, which is why we offer medical marijuana counseling with certified professionals, so that you can navigate your own health journey safely and comfortably.

Follow our link to secure your appointment with a certified medical marijuana practitioner completely online. We serve Ohio, from Lake Erie’s Cleveland shores, to the bustling markets of Columbus and Cincinnati. We offer the same services in Michigan, from Grand Rapids, to Morenci, to the mighty motor city, providing access to fresh, healthy medicinal marijuana right from the comfort of your very own space.