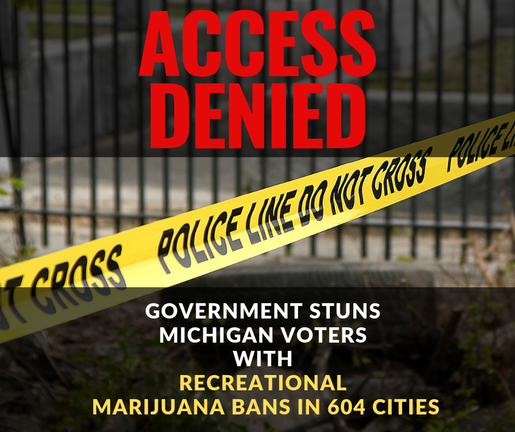 Michigan voters show overwhelming support for legalization, but local governments across the state — 604 and counting — are creating bans to try and stop the recreational marijuana business. Are your rights in jeopardy?

The Wolverine State became a forerunner for marijuana in the Midwest, as the first state in the region to legalize it medicinally in 2008. They continued that trend last November, going first with recreational 56-44.

But in the gap between medical and recreational sales, over 600 Michigan communities have opted out, banning the very businesses they’d just voted for.

And while It’s not unusual for smaller towns to balk after a state legalization – especially in the puritan Midwest – these latest bans outline the development of an alarming administrative trend.

It’s been made clearer over time that these governments are okay with sideswiping the will of their constituents, slapping bans on weed business out of fear and an ardent lust for control.

In September of 2018, A Michigan public policy survey conducted by CLOSUP, the Center for Local, State and Urban Policy, found that 61% of Michigan residents supported legalization of recreational marijuana, while an overwhelming 79% of local officials did not.

This administrative bias continues to manifest in patterns of local policy.

Recreational marijuana legalization passed easy in Pontiac, Michigan’s poorest locale, with 68 percent of the vote. But their city council jumped on banning recreational marijuana businesses straightaway, which simply doesn’t add up for a place with a stagnant economy and a population in severe decline.

In an interview with WUWM.com, researcher Tom Ivacko boils it down to peer-pressure and politics that results in gads of administrative red tape.

Some experts say the bans are just precautionary measures, and that they’ll subside in the sticks once the smoke clears. In an interview with the Detroit News, Josh Hovey, a spokesman for the Michigan Cannabis Industry Association, says he understands, but ultimately sees a failing strategy.

“A lot of communities are taking a conservative approach and want to make sure they understand the ins and outs of the law,” he said. “We expect many of them will begin to opt back in the near future, especially as they watch other communities that are successfully welcoming cannabis businesses and realizing that the problems they anticipated are not there.”

“If they’re familiar with the medical marijuana law, there’s really nothing new or surprising in the recreational rules,” he said. “So my question would be: what are you waiting for?”

Democracy will prevail in the end, he says.

While not immune to midwestern conservatism and administrative pressure, larger Michigan towns, like Detroit, Lansing, Ann Arbor and Grand Rapids,  are moving ahead with legalization.

“It’s no small thing that the second-largest city in the state is moving forward with this,” Andy Johnston, vice president of government and corporate affairs for the Grand Rapids Area Chamber of Commerce, told MLive.com. “For better or for worse, we’ll be this hub in west Michigan when it comes to marijuana — so we need to make that work really well for the community.”

Melody Arndt, of nearby Rockford told MLive that she agrees.

“The state of Michigan has voted that they want legalized marijuana — and who are we to say that a business can’t sell a legal substance in the city?” she said as she walked past Bridge Street brewpubs and bars. “I think we have to get ready. I mean we can’t keep isolated in our own little world and pretend that everyone else is different from us.”

Even in the midst of monumental change Michigan has emerged as a leader, as the complexity of the culture of the old frontier remains a thorn in the side of progress.

OSU’s Humanities Institute illustrates the character of the region as a whole:

“Prodesse quam conspici” (“To produce rather than to be conspicuous”), the motto of Miami University in Oxford, Ohio, is a fitting credo for the American Midwest as a whole. In the popular imagination, Midwesterners are generally considered proudly ordinary people who speak dialect-free American English and go about their business without fanfare or drama. Performers born there tend to leave, though pride in life and place is given a visible presence. Those who remain daily demonstrate the workings of a democratic culture that embodies what many people consider the fulfillment of the American Dream. Midwesterners, writes our Language Section Editor, “are thought to be strong, brave, polite, hard-working, self-effacing, self-sufficient, generous, friendly, Protestant, white, normal, average, and boring.”

These iconic images seem so natural and right to so many people that they easily obscure the contingent and contested culture of the American Midwest. In accepting what the region has become and the image it projects (or what other people project onto it), we sometimes lose sight of its diversity, its exceptionalism, and the paths its residents have chosen not to follow. The modesty announced in prodesse quam conspiracy has been accompanied not only by confidence in the institutions of family and community and a capacity to overcome adversity but by an acceptance of the status quo, a distrust of idiosyncrasy, an avoidance of confrontation, and a general lack of self-reflection.”

Ultimately self-reflection in the Midwest may be the key to winning the fight.

People accept and understand change at varying rates, and while we respect others’ opinions, we don’t have to continue to suffer because of their fears, fixed perspectives or gross misinformation. There are many knowledgeable, compassionate medical marijuana doctors in Ohio, who would be happy to assist you with an evaluation toward opening your mind and body to the immense possibilities medical cannabis can provide.

There’s a whole community of caring, compassionate professionals that may have just the answers you’ve been looking for when it comes to pain and chronic disease. Our medical marijuana doctors in Michigan are licensed, educated and ready to help take your treatment to the next level. Don’t let others fears deter you from living your best life.

If you are an Ohioan suffering from one of these 21 medical conditions you may be eligible to obtain your own Ohio Medical Marijuana Card to treat your ailment with medical marijuana, which includes both THC and CBD products.